Nisin, the active ingredient in Niseen®, is a polycyclic antibacterial peptide with 34 amino acid residues used to prevent spoilage and extend shelf life of various foods by inhibiting Gram-positive spoilage and pathogens. Nisin is effective against a wide range of Gram-positive bacteria, both as vegetative cells and as spores, used worldwide since 1953 to control bacterial spoilage in both heatprocessed and low-pH foods. It is a small peptide produced by Lactococcus lactis, a bacterium which occurs naturally in milk.

Nisin was found naturally in milk in 1950s, and commercialized at 2.5% concentration in 1953. In 1969, Nisin was approved for use as an antimicrobial in
food by the Joint FAO/WHO Expert Committee on Food Additives. After then Nisin has been given E number E234 in Europe as natural food additives and is permitted currently for use in over 50 countries. 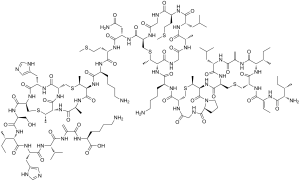 Nisin works in a concentration dependent fashion; thus the more bacteria present in a food the more Nisin may be required. Nisin initially forms a complex with Lipid II, a precursor molecule in the formation of bacterial cell walls. The Nisin–lipid II complex then inserts itself into the cytoplasmic membrane forming pores and allows the efflux of essential cellular components resulting in inhibition or death of the bacteria.

Nisin is a natural antibacterial food preservative as it is a polypeptide produced by certain strains of the food-grade lactic acid bacterium Lactococcus lactis subsp. lactis during fermentation production. Research also shows it is also toxicologically safe. In 1969, Nisin was approved for use as an antimicrobial in food by the Joint FAO/WHO Expert Committee on Food Additives.

Nisin A and Nisin Z are of vegetal origin, two natural variants of the Nisin that are produced by Lactococcus lactis are known. They have a similar structure but differ in a single amino acid residue at position 27; histidine in Nisin A and asparagine in Nisin Z. The Nisin variants were purified to apparent homogeneity, and their biological activities were compared. Identical MICs of Nisin A and Nisin Z were found with all tested indicator strains of six different species of gram-positive bacteria. However, at concentrations above the MICs, with Nisin Z the inhibition zones obtained in agar diffusion assays were invariably larger than those obtained with Nisin A. This was observed with all tested indicator strains. These results suggest that Nisin Z has better diffusion properties than Nisin A in agar. The distribution of the Nisin variants in various lactococcal strains was determined by amplification of the Nisin structural gene by polymerase chain reaction followed by direct sequencing of the amplification product. In this way, it was established that the nisZ gene for Nisin Z production is widely distributed, having been found in 14 of the 26 L. lactis strains analyzed.

The solubility of Nisin A is highest at low pH values and gradually decreases by almost 2 orders of magnitude when the pH of the solution exceeds a value of 7. At low pH, Nisin Z exhibits a decreased solubility relative to that of Nisin A; at neutral and higher pH values, the solubilities of both variants are comparable. Two mutants of Nisin Z, which contain lysyl residues at positions 27 and 31, respectively, instead of Asn-27 and His-31, were produced with the aim of reaching higher solubility at neutral pH. Both mutants were purified to homogeneity, and their structures were confirmed by one-and two-dimensional 1H nuclear magnetic resonance.

Their antimicrobial activities were found to be similar to that of Nisin Z, whereas their solubilities at pH 7 increased by factors of 4 and 7, respectively. The chemical stability of Nisin A was studied in the pH range of 2 to 8 and at a 20, 37, and 75 degrees C. Optimal stability was observed at pH 3.0. Nisin Z showed a behavior similar to that of Nisin A. A mutant containing dehydrobutyrine at position 5 instead of dehydroalanine had lower activity but were significantly more resistant to acid-catalyzed chemical degradation than wild-type Nisin Z.

*The dosage shown refers to 2,5% nisin preparation in NaCl.

Following the Amendments of Directive 95/2/EC, now Nisin (E234) will be allowed also in pasteurized liquid eggs in EU.

In the European Commission’s words, nisin (E234) ” is not a safety concern and is justified from a technological point of view to extend the shelf life of the product and also to prevent the growth of food poisoning spore-forming species, like Bacillus cereus, which may survive from pasteurisation treatment.”

Link to the Directive

This site uses cookies. By continuing to browse the site, you are agreeing to our use of cookies.

We may request cookies to be set on your device. We use cookies to let us know when you visit our websites, how you interact with us, to enrich your user experience, and to customize your relationship with our website.

Click on the different category headings to find out more. You can also change some of your preferences. Note that blocking some types of cookies may impact your experience on our websites and the services we are able to offer.

These cookies are strictly necessary to provide you with services available through our website and to use some of its features.

Because these cookies are strictly necessary to deliver the website, you cannot refuse them without impacting how our site functions. You can block or delete them by changing your browser settings and force blocking all cookies on this website.

These cookies collect information that is used either in aggregate form to help us understand how our website is being used or how effective our marketing campaigns are, or to help us customize our website and application for you in order to enhance your experience.

If you do not want that we track your visist to our site you can disable tracking in your browser here:

We also use different external services like Google Webfonts, Google Maps and external Video providers. Since these providers may collect personal data like your IP address we allow you to block them here. Please be aware that this might heavily reduce the functionality and appearance of our site. Changes will take effect once you reload the page.